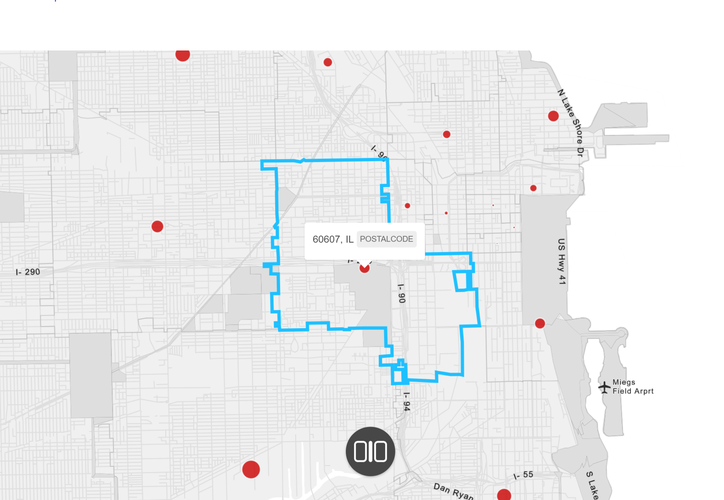 The approximate population of University Village is 27, 557 people. This is very big population for a neighborhood, but many of the residents are college students living in a dorm. 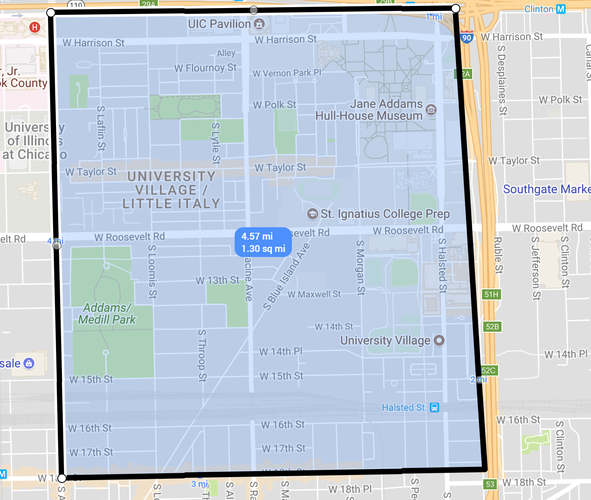 The approximate area of University Village is 1.30 square miles. This is pretty big, hundreds of times larger than the size of a football field. 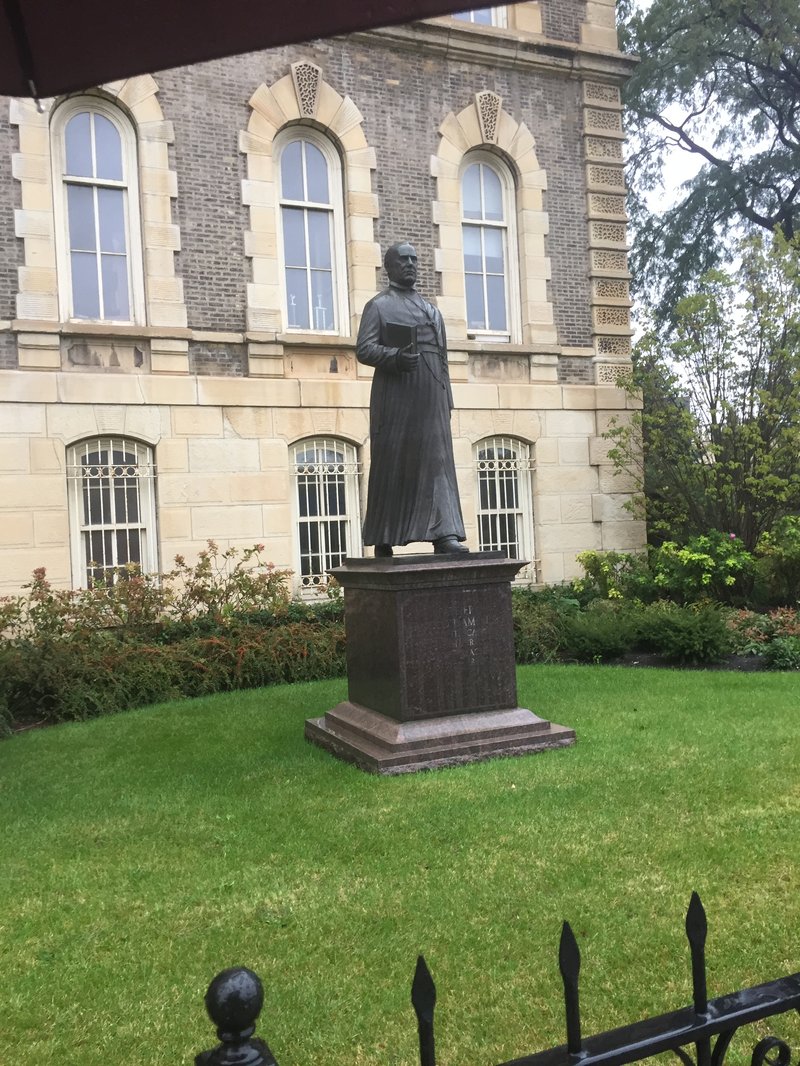 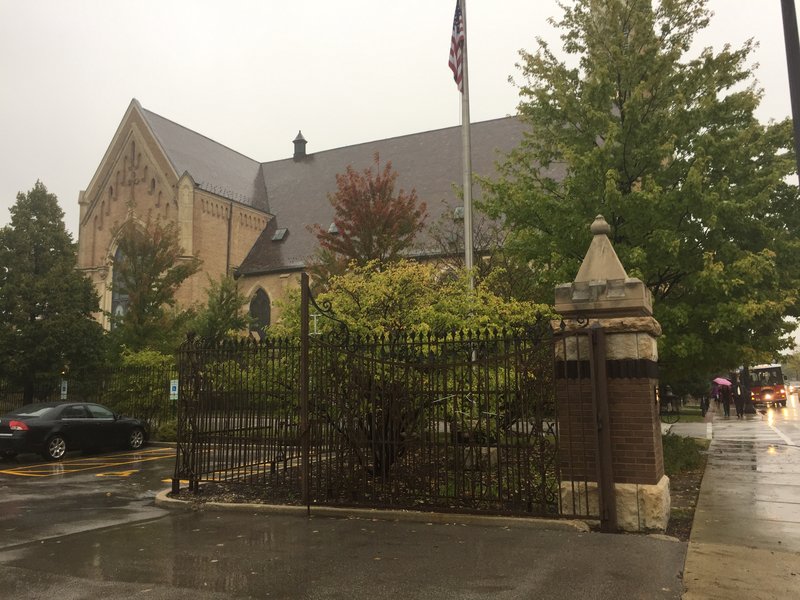 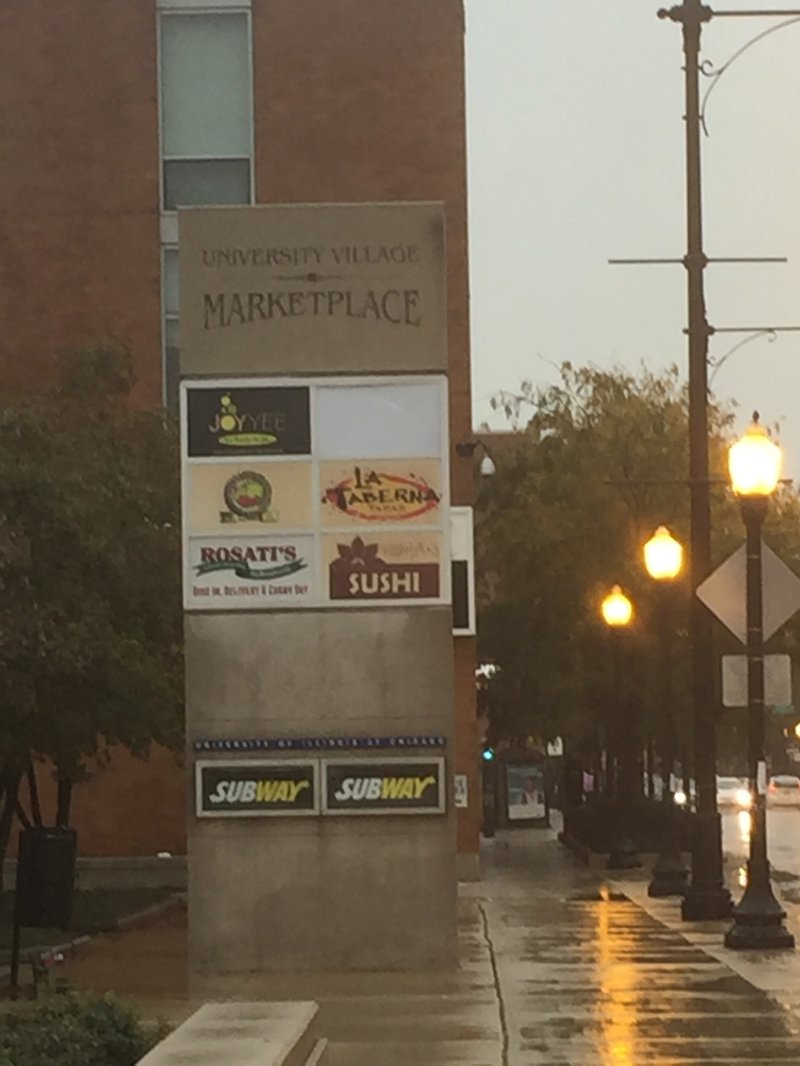 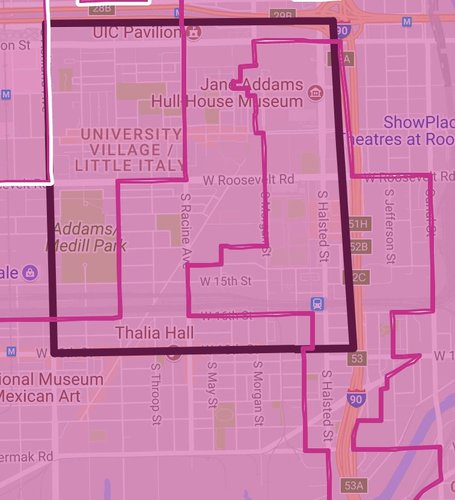 I made this map using public adlermanic boundaries from Chicago Data Portal. 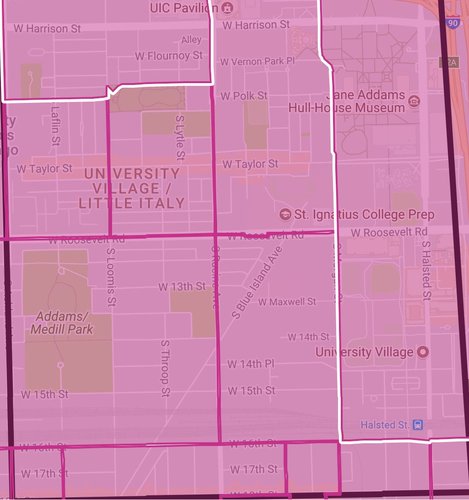 Twelve census tracts fall within the boundaries of University Village.

I made this map using public census tract boundaries from Chicago Data Portal. 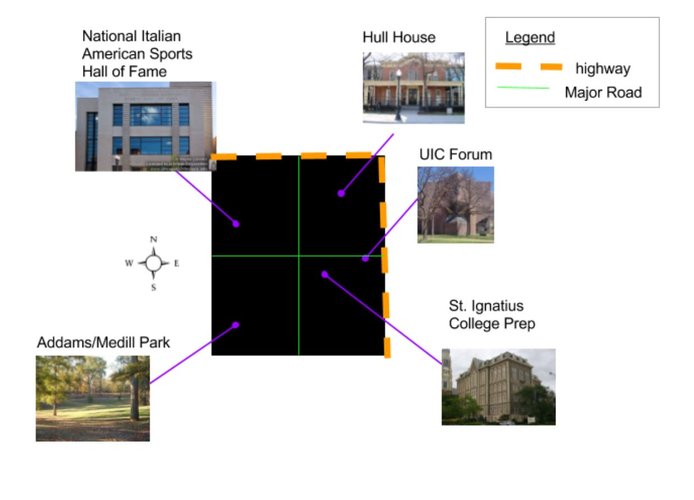 University village is a neighborhood on the West-side of Chicago that used to be called Little Italy. University Village was dubbed “Little Italy” because in the 20th and 19th century century many Europeans immigrated to the west side of Chicago. This was a national trend in America of a huge up tick in European immigrants.

The influx of European immigrants was supported by Little Italy's Hull House in the north of present day University Village. The Hull House took in immigrants and offered food, citizenry classes, and other community building opportunities.

Historically, Little Italy was multi ethnic, but Italian culture had a strong impact on the neighborhood. Especially on Taylor street, there were many Italian restaurants and institutions. Today a few vestiges of the Little Italy past remain especially in the form of big Roman Catholic Churches. Additionally in the north west of the neighborhood there is a National Italian American Sports Hall of Fame.

As time went on, the neighborhood became more and more racially and ethnically diverse. In 2000, Little Italy re-branded itself as University Village. As its name suggests, the identity of University Village no longer rests in Italian heritage but in the proximity to University of Illinois at Chicago.

When it comes to racial diversity, University Village isn’t super diverse but it matches up to the level of diversity for the Near West Area Community Village. Although it only has a 2.27/4 the amount of Asian people in Near West Area Community Village is very high. The amount of black people, however, is very low consider the number of black people in Chicago. These demographics can probably be attributed to the demographics of The University of Illinois at Chicago which is a huge part of University Village.

University Village is pretty diverse in education but not very much. Again, this is probably because of the university. Most of the diversity in education comes from the fact that there are many people who obtain professional and doctorate degrees. However, there is very little representation for people who did not finish high school. 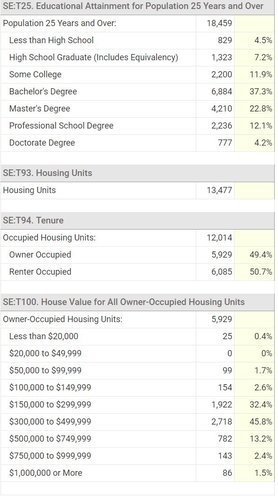 Boundaries of the center of University Village

The major center in University Village is on West Taylor street, starting at the intersection of Taylor and Ashland and going eastward until Morgan Street. The graphic below shows the boundaries of this center.

This is one of the busiest streets in University Village and serves as a major commercial street. I walked up and down this street on a sunny day, and saw many people shopping and eating outside.

West Taylor street has wide sidewalks and I noticed that on nice days, large groups of people congregate on the sidewalks outside of stores. West Taylor is also flanked with benches and although many go unused, outside of the most popular restaurants the benches seemed to always be filled.

West Taylor is mostly filled with restaurants and cheap eateries like Golden Thai and Potbelly. There are very few restaurants that aren’t fast food so when I was walking I got the impression that Taylor street was accessible to many types of people.

Additionally, many of the restaurants are Italian (ex: Pompei, Mario’s Italian Lemonade, Conte de Savoia). The picture below is one of the biggest Italian restaurants on West Taylor. 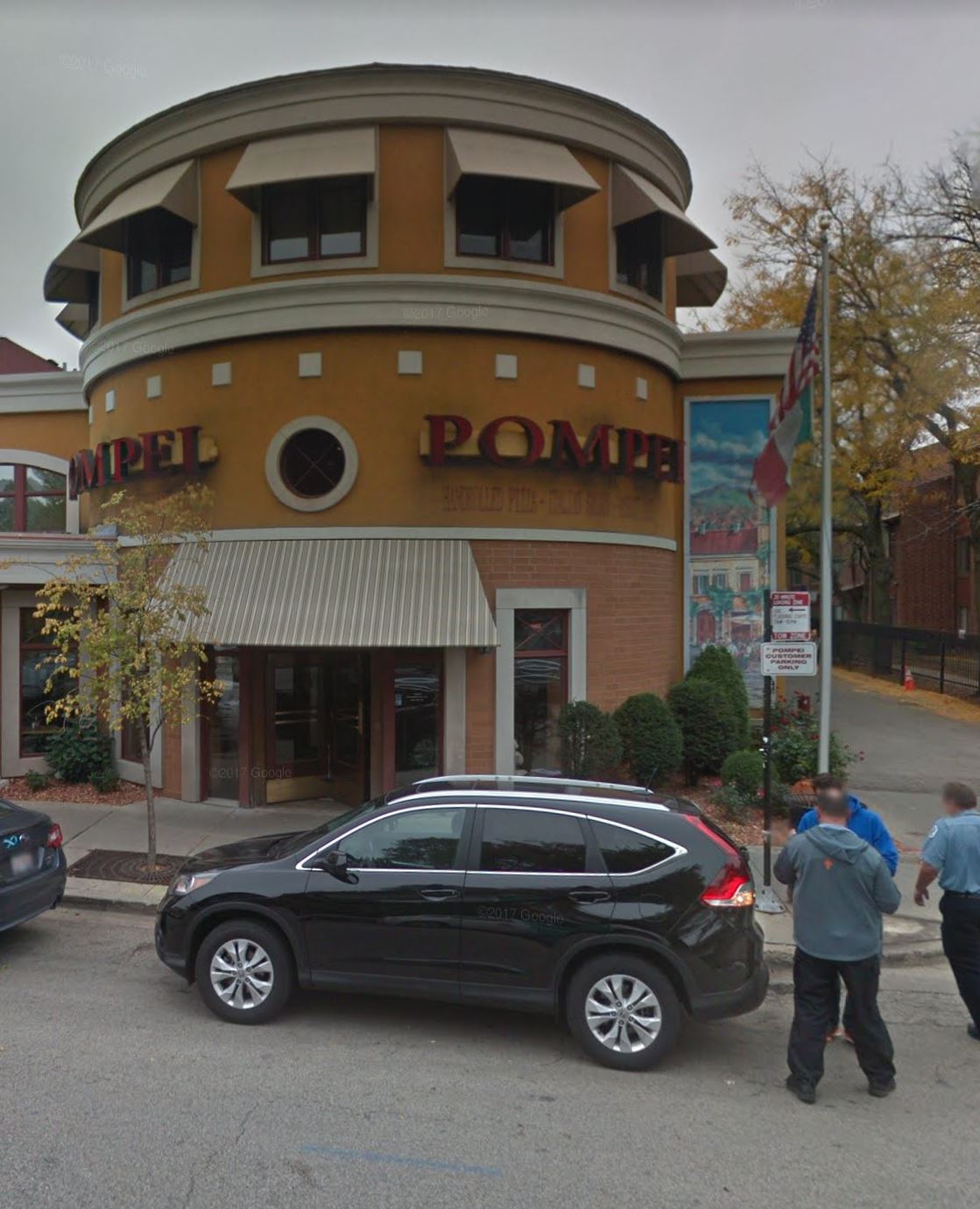 So while although the rest of University Village’s identity is wrapped in UIC, Taylor Street serves as a vestige of the Little Italy that used to exist. This seemed to be important to the ability of Taylor and Ashland to function as a commercial center because as I mentioned in the ‘Overview’ tab, residents with Italian connection mostly reside near Taylor Street and the western and southern boundaries of the neighborhood.

Additionally, because of how close it is to UIC (it’s right down the block) I saw many students on Taylor Stret as well. In this way, Taylor Street strikes me as a street that serves both students and affiliates from UIC, as well as non-university residents with Italian and European connections.

However, although this street was a commercial center and the benches were able to marginally make this street a social center --- overall West Taylor Street has little to no large public, social spaces. This can be seen in the above map which shows several places to eat but no green space. Regardless though, Taylor street definitely does seem to bring people together for lunches, dates, and even just hanging out. 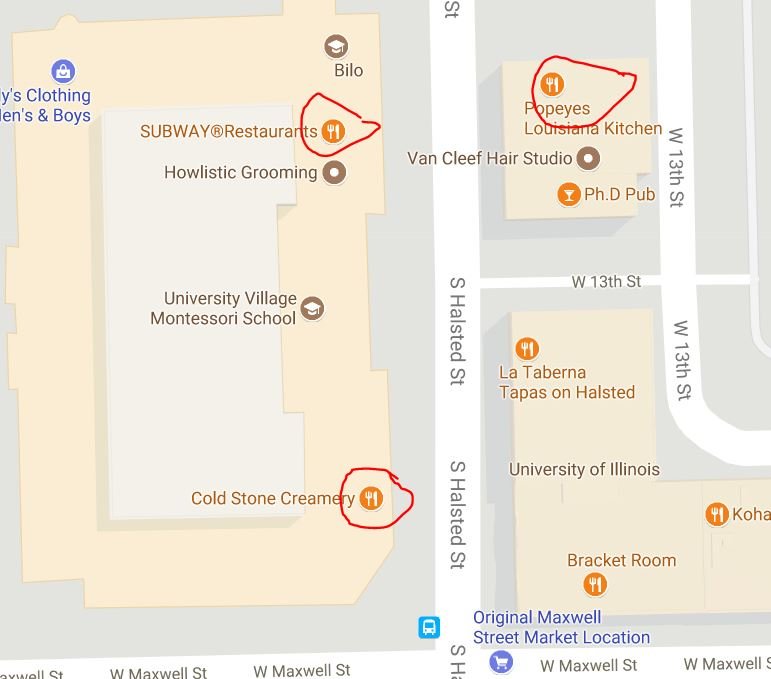 In this area of the neighborhood, the big franchises seem to have a negative impact on the few small business that are in the area. When I was in the area, these huge restaraunts and stores were really popular with college students and the smaller places were consistently less busy.

Similarly, West Taylor Street is mostly locally owned businesses and outside of a few notable exceptions (Starbucks and 7/11), the franchises seem to really fade in the background. The local restaraunts really thrive in this part of the neighborhood especially Pompei and Vintage Lounge. 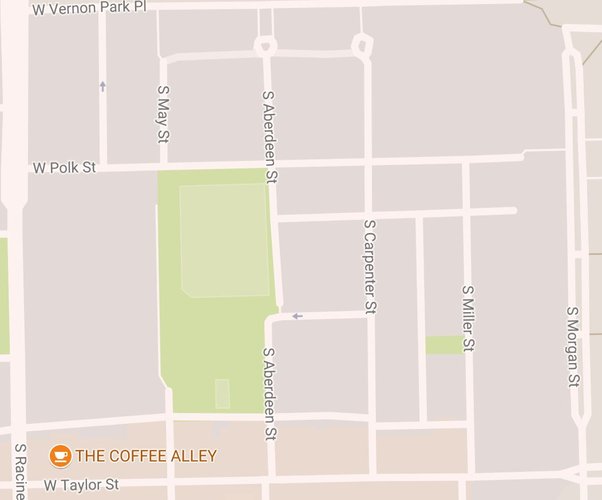 The North East of  University Village is mostly composed of square blocks and elongated blocks. 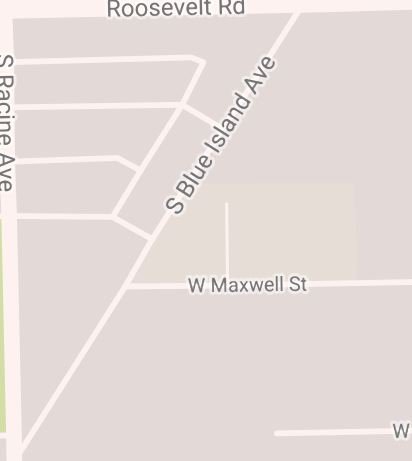 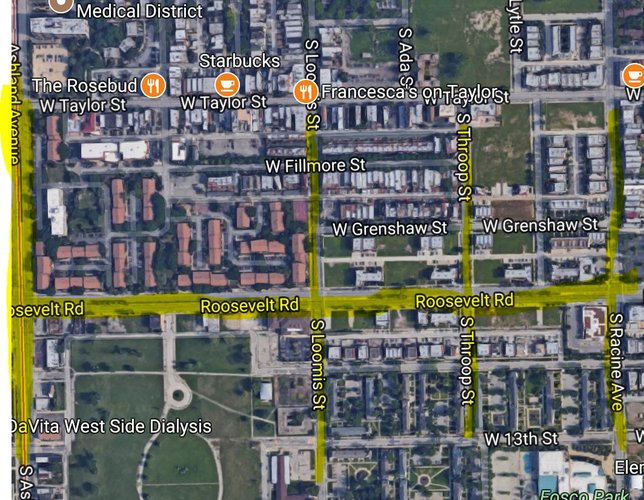 The center of University Village most closely matches the Radburn Pattern. This is because a major road, Roosevelt, serves as a thorough fair that divides the entire neighborhood in half. However, unlike the Nantucket plan, this plan creates a controllable variety of blocks in University Village that are mostly blocks or elongated. 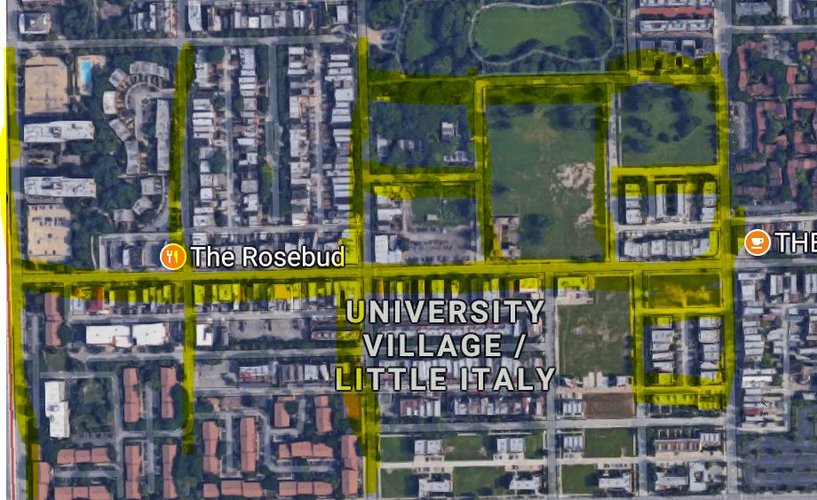 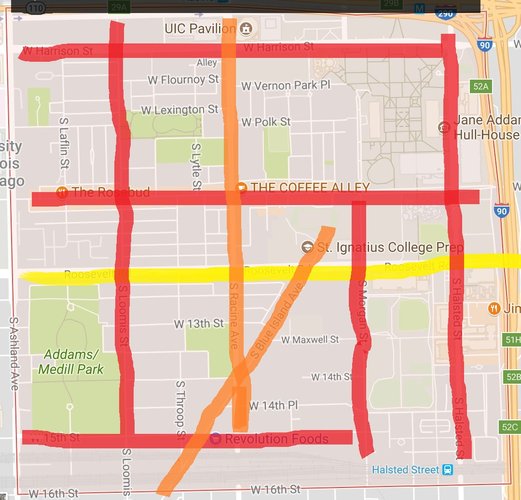 The square blocks and elongated blocks in University Village seem really strategic and purposeful for the overall connectivity. The elongated blocks are mostly centered around residential areas and commercial centers. Here, they help residents have a good sense of where they are. Additionally, although they're long --- they seem to be pretty walk-able. The few square blocks in University Village are almost all centered around churches, schools, or museums. This works really well for University Village because these sorts of places require the shortest amounts of walking and the number of landmarks decreases the need for residents to know where they are.

On the other-hand, the irregular blocks seemed to impede connectivity in University Village. They're very awkward, random and create weird traffic patterns in the southwest area of the neighborhood.

In terms of thoroughfare, University Village is primarily streets, but has a major road dividing it in half horizontally and a major avenue dividing it in half vertically. The Radburn and Nantucket patterns that are prominent in the neighborhood creates a traffic pattern that centers around this major road and avenue. Even though there's no social "center" of the neighborhood, these patterns create a center at least in terms of traffic. These patterns also seem to help connectivity because it's clear for residnts how they need to get in and out of the neighborhood.

Strengthening Sense of Identity and Cohesion in University Village

First, I would propose creating a social center on Taylor Street. In University Village, there are very few active public spaces. There are a few parks like Addams Medill Park and Arrigo Park, but they are rarely very populated. Additionally, they seem to only be of interest to non-university residents and there’s no sense that these parks are specific or special to University Village. As it is, there doesn’t seem to be any social center of University Village that unites the whole neighborhood. 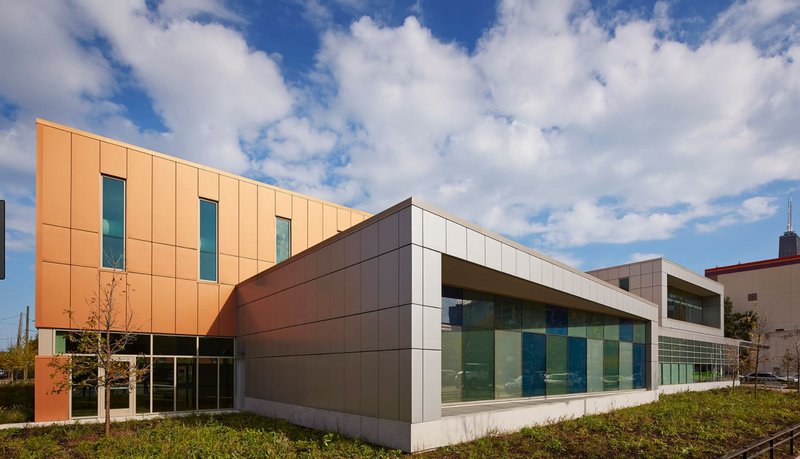 The Jesse White Park Community Center is an example of an effective community center on the Near North Side. This center has hang out spaces, class-rooms and gyms. [Source: Design Excellence Work]

The closest place to a center is Taylor Street which is a commercial hub for both University affiliates and non-university affiliates. Therefore, Taylor Street would be a perfect place for a community center like the Jessie White Community Center & Field House in the Near East Side.  A University Village Community Center would increase the sense of ownership residents have for their neighborhood while also reaffirming the identity of University Village and uniting university and non-university residents.

An optimal spot on Taylor Street for a community center.

Second, I would propose the installation of several historical markers about University Village and Little Italy. These signs could be similar to the ones they have in Louisville, Kentucky. An example of this is below. 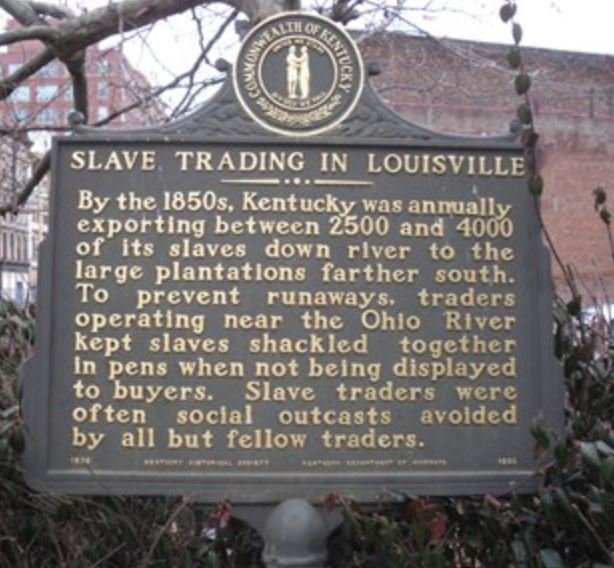 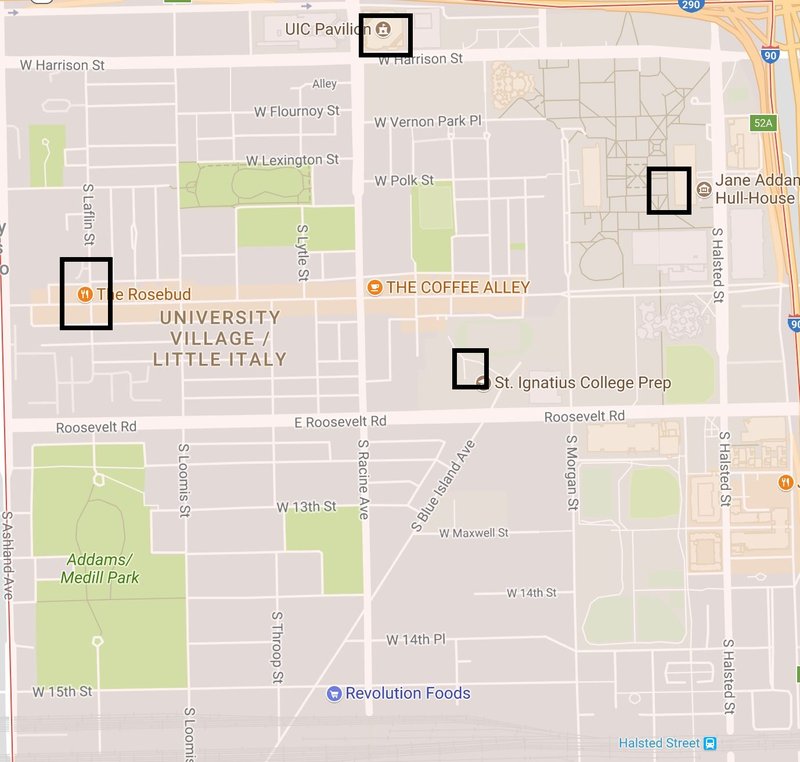 An example of  a few locations for historical markers. Ideally, they should be all around the neighborhood, but these locations are especially important for Italian landmarks such as Taylor Street, St.Ignatius, and  and Hull House.

Not only would murals increase aesthetic appeal but they would also increase the sense of identity by exploring values, images, and art that explores the past of University Village.

These murals could also be used to improve the aesthetics of big green spaces. 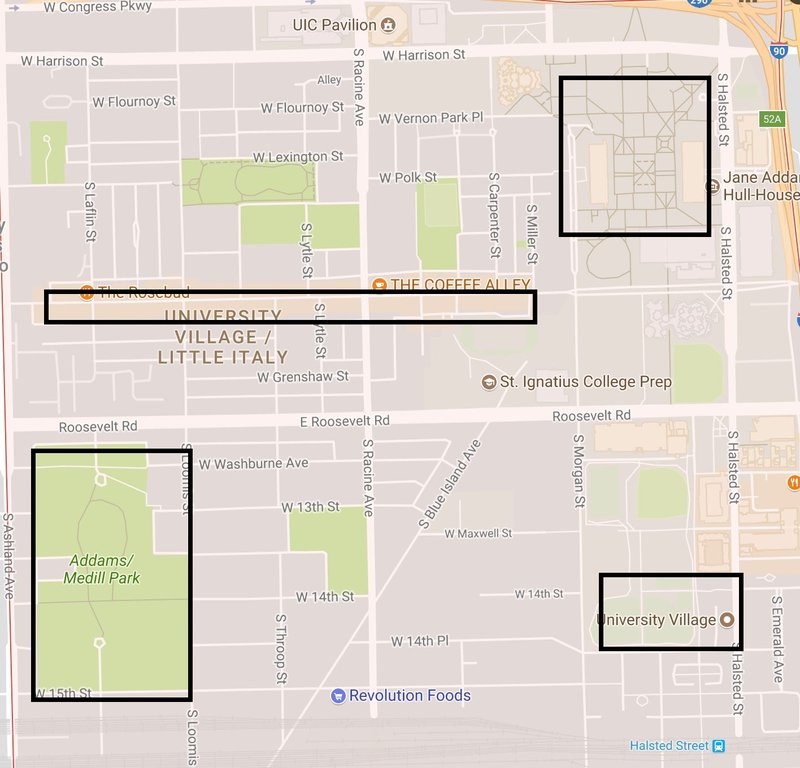 Potential places for murals. These centers are high traffic and very popular. Thus, murals in these locations would receive a lot of attention. 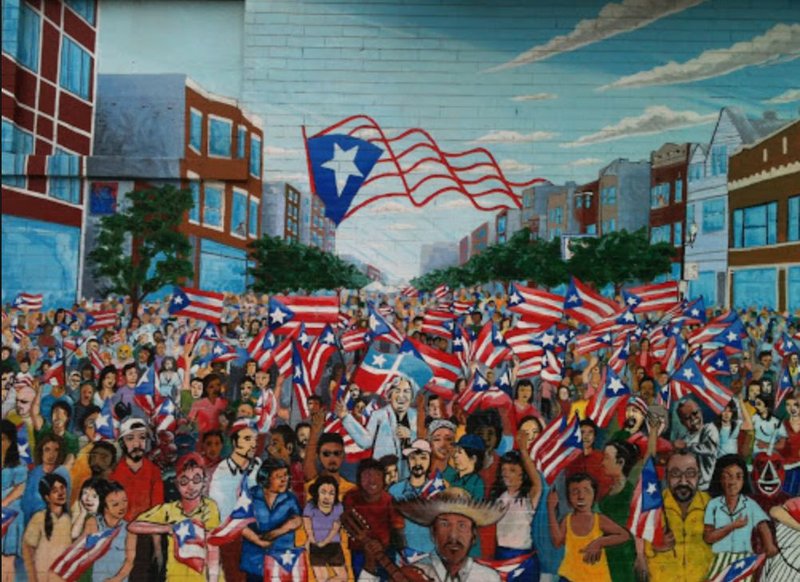 An example of a mural in Humboldt Park that explores the identity and history of the neighborhood.  [source:chicagomurals.wikispaces.com]